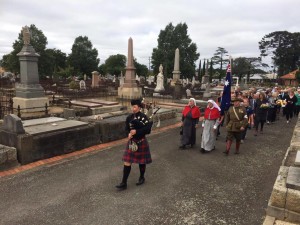 On Saturday morning I had the pleasure of piping for Annie Westcott’s memorial. An unusual request- playing bagpipes for a funeral where the person died nearing 60 years ago! But a great honour and for a great cause. I lead the procession with tunes from the WWI era, and then piped the traditional ‘Flowers of the Forest’ as people laid wreaths.

Annie served as a nurse in WWI who lived and died in Ballarat. She was buried in the Old Cemetery with no identification on her grave. On discovering that one of their former members was lying anonymously in a grave in the Ballarat Old Cemetery, the Ballarat Base Hospital Trained Nurses League immediately set about raising the funds to give Annie her identity and recognition. Nurses League spokesperson, Trina Jones, said “Our membership was unanimously of the view that we should do something to ensure her last resting place carries her name and acknowledges her service to her country.” Ballarat General Cemeteries’ CEO Annie De Jong said she was very pleased to be able to assist the Nurses League with arrangements for the commemorative service and unveiling. “Nurse Westcott’s story came to light during the preparation of our book They Answered Their Country’s Call, so we are delighted to partner with the Nurses League to commemorate Annie and WWI Nurses service”.

Her story is quite remarkable, she trained in Ballarat as a nurse. At 40 years of age and with 16 years of nursing and administration experience, Nurse Wescott joined the Australian Army Nursing Service in October 1915. A month later she embarked from Melbourne on the Orsova and sailed to Egypt just in time for the influx of sick and wounded soldiers being evacuated from Gallipoli. She joined the staff at the 1st Australian General Hospital based in the Grand Heliopolis Palace Hotel in Cairo, but the growing number of patients forced the hospital to expand into the neighbouring Luna Park where the ticket office became an operating theatre.

To join the AANS, women had to be unmarried and between the ages of 21 and 40, consequently due to her age Annie’s overseas service was cut short. On January 21st 1916 she left from Suez aboard the HMAT Commonwealth, nursing soldiers who were being returned home. She then served with the AANS until February 1917.

She married Frederick Smith in 1917 and moved to Gippsland but later returned to Ballarat where she died in 1951. She was buried with other family members whose names were recorded on the headstone, but for some reason Annie’s name was not added.

It was a great privilege to be the lone piper for the Ballarat RSL remembrance service today. I feel honoured to be able to pay my respects to our Anzac through my music.